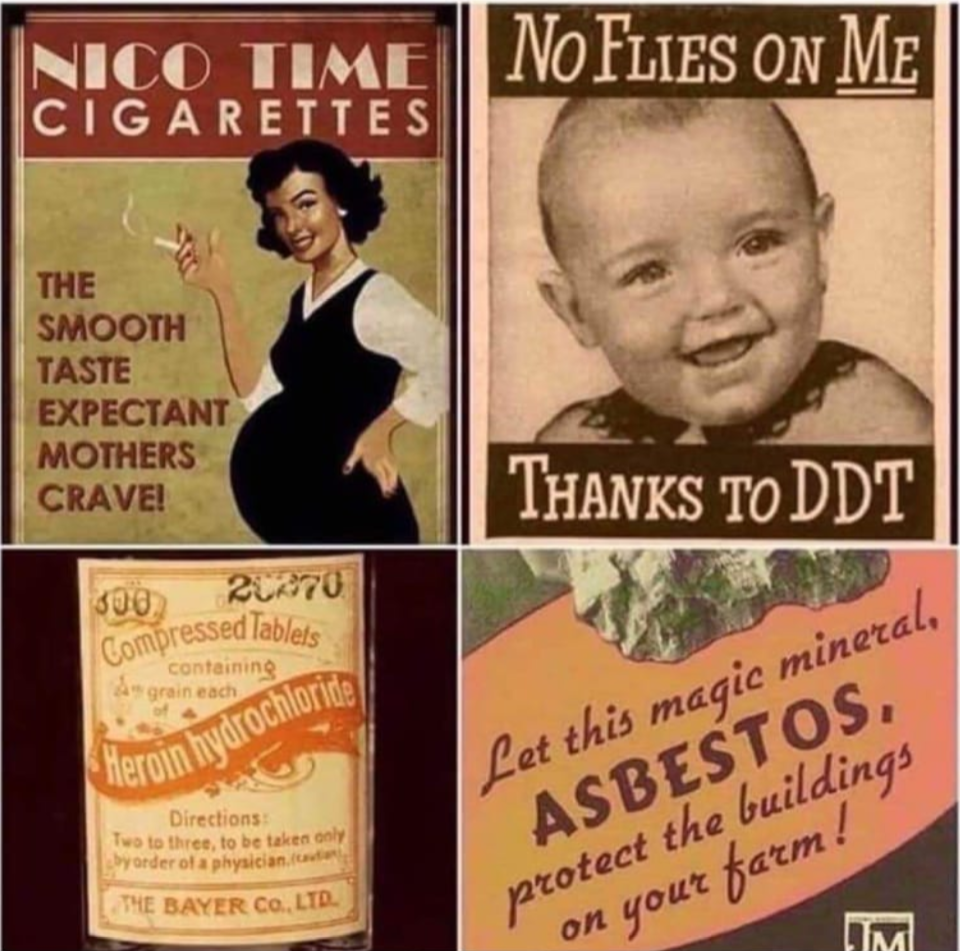 The above picture is captioned with this text: “There was a day when SCIENCE backed all of these things too and just like today, those research studies were funded by the industry and corporations themselves“

We looked at each of these adverts and pointed out how science isn’t the bad guy here, and show how science was the tool-kit that the good guys to challenge these products.

DDT, the scientist Rachel Carson highlighted the growing body of evidence that synthetic pesticides such as DDT were harming some wildlife species. She used rigorous scientific research and excellent writing to highlight the dangers of these pesticides in her book ‘Silent Spring’ which achieved great acclaim after being serialised in The New Yorker. This led to the eventual banning of DDT and was credited with a wider awakening contributing to the environmental movement.

Smoking, again the diligent work of hundreds of scientists, helped bring the dangers of smoking to the fore, enabling public health bodies to advise people of the dangers and pushing for regulations to curb the industry. For example, over 50 years ago the US Surgeon General took steps to inform the public of the dangers, and he could do this thanks to the extensive body of evidence uncovered by scientists and doctors.
In an interesting twist, a former tobacco company scientist helped to raise the alarm about the corrupt practices and incentives in the tobacco companies in the article “The Man Who Knew Too Much” by Marie Brenner. Later dramatized by Michael Mann in the movie ‘The Insider’.

Asbestos, used since ancient times (did you know some Egyptian mummies were wrapped in it?) was first recognised as a potential cause of lung disease and cancer in the late 19th and early 20th century. It took a long time for doctors to appreciate the dangers due to the delayed action of the Asbestos. But again the evidence of doctors (like Dr. E.R.A. Merewether) resulted in greater awareness of the risks, and the beginning of regulations to protect workers in the 1930s. Later on, trade unions also realised the risks to their workers, and forced employers to switch to safer materials or supply appropriate safety gear.

Heroin is a splendid example of a drug that has saved millions of people from suffering and pain. First developed in 1874, we still use Heroin today in medicine (Under the name Diamorphine), e.g. during a painful labor in many countries, including the UK. It’s even available on prescription in some European countries to treat addiction to other opiates. Like all powerful medicines, it should be dispensed only by skilled and qualified clinicians such as doctors and midwives. Luckily, thanks to years of rigorous scientific study, clinicians can prescribe it with an expert knowledge of its benefits and side effects.
Read this interesting story from Nov. 2019 on how the controlled deployment of Heroin to those suffering substance abuse is helping to save lives in Scotland, but is being held back by outdated views and regulations.

Each of these examples shows us how science helped us to find out the truth about their risks and benefits.